Major League Baseball’s trade deadline isn’t until 6 p.m. ET on Tuesday, but there already have been some big deals made.

And the New York Yankees added to their pre-trade deadline acquisition of All-Star outfielder Andrew Benintendi by adding a top setup man from the Chicago Cubs to their bullpen. Then the American League’s top team went a step further by acquiring two top pitchers from the Oakland Athletics as they make a push for their first World Series title since 2009.

What other deals could be made as the countdown to the deadline continues? USA TODAY Sports will provide updates on all the key trades.

OPINION: Yankees are making it clear at trade deadline: World Series or bust

Sox (both Red and White) get busy

Veteran outfielder Tommy Pham is also reportedly headed to the Boston Red Sox for a player to be named later. Once the deal is complete, this will be Pham’s fifth team in the last five seasons

Braves lock up another young star

Riley is hitting .301 with 29 home runs and 68 RBI this season for Atlanta, who are three games back of the New York Mets in the NL East. Eleven of his home runs came in July, and he had a franchise record 26 extra base hits in the month, breaking a 60-year old record.

The Yankees, owners of the league’s best record, were always going to be a buyer at the trade deadline. It started with Andrew Benitendi on Thursday, continued Monday afternoon with the acquisition of right-hander Scott Effross and really ramped up a few hours later.

Now they are acquiring right-handers Frankie Montas and Lou Trivino from the Oakland Athletics, according to ESPN.

Montas will join the Yanks’ starting rotation, while Trivino will provide New York with another bullpen option. The A’s will get left-handers Ken Waldichuk and J.P. Sears, right-hander Luis Medina and second baseman Cooper Bowman.

The Houston Astros, who begin the week two games back of the Yankees in the AL standings, traded for 1B/OF Trey Mancini from the Baltimore Orioles and right hander Jayden Murray from the Tampa Bay Rays. Mancini is hitting .268 with 10 home runs and 41 RBI in 92 games. The Orioles receive RHP Chayce McDermott from the Astros and Tampa Bay gets outfielder Jose Siri from Houston.

The reigning AL champions also acquired catcher Christian Vázquez from the Boston Red Sox. Vazquez, 31, spent eight seasons with the Red Sox and is hitting .282 with eight home runs and 42 RBI in 2022. Boston will receive prospects Enmanuel Valdez and Wilyer Abreu, the 28th- and 29th-ranked prospects in the Astros organization.

We finally have our first blockbuster deal of this year’s trade deadline. Two National League playoff contenders have swapped closers as part of a five-player trade.

“The players we are receiving in this trade help ensure that the future of the Milwaukee Brewers remains bright while not compromising our desire and expectation to win today,” said Brewers president of baseball operations David Stearns. “This mix of present Major League talent and high-level prospects furthers our aim to get as many bites of the apple as possible and, ultimately, to bring a World Series to Milwaukee.”

Hader solidifies the back of the Padres bullpen for the stretch run after Rogers was just moved out of the closer’s role. Meanwhile, setup man and 2020 NL rookie of the year Devin Williams figures to slide into the closer spot in Milwaukee.

Hader leads the majors with 29 saves. Rogers is second with 28.

Now, after acquiring Hader and re-signing ace Joe Musgrove (see below) … will the Padres make another major move and go after Soto?

The 27-year-old Misiewicz, who will be added to the Royals’ 40-man roster and optioned to Class AAA Omaha, appeared in 17 games for Seattle this season with a 4.61 ERA. He was optioned to Triple-A Tacoma on June 10, where he had a 3.65 ERA in 13 appearances.

Misiewicz made his big league debut in 2020 and led Seattle in appearances in each of his first two seasons, including a career-best 66 last season, when his 19 holds ranked eighth in the American League.

Rays pick up a bullpen arm from Dodgers

Not every trade can be a headline-grabber. The Tampa Bay Rays are masters at adding on the margins and they may be looking to do just that with the acquisition of lefty reliever Garrett Cleavinger from the Los Angeles Dodgers.

Cleavinger, 28, posted a 2.79 ERA in 29 innings at Class AAA Oklahoma City this season, but gave up five earned runs in 4 1/3 innings with the Dodgers. He also previously appeared in the majors in 2021 with L.A. and 2020 with Philadelphia.

With barely a day remaining to determine Juan Soto’s fate – move to a contender at Major League Baseball’s trade deadline, or draw walks in baseball purgatory for two more months – the field for his services seems to narrow.

It can be argued that the opposite should be happening.

With two full seasons and this upcoming playoff drive available to clubs aiming to acquire the Washington Nationals slugger, it’s the usual suspects, fitting a specific profile, in play for Soto. Bigger-spending, bigger-market clubs with flush farm systems are indeed the publicly-known players, with the Los Angeles Dodgers, San Diego Padres and St. Louis Cardinals certainly among the finalists.

Yet we can spot many more clubs that should strongly consider trading for Soto, even if many lack the prospect goods to acquire this 23-year-old hitting savant.

Here’s a look at what we think good, healthy competition for this generation’s Ted Williams might look like.

Before the San Diego Padres made the move to acquire Josh Hader, they made a major financial commitment to one of their own players.

Right-hander Joe Musgrove has agreed to a five-year, $100 million contract extension with the team.

The deal makes perfect sense. Musgrove is a native of San Diego and has been the team’s best pitcher this season with an 8-4 record and 2.65 ERA in 16 starts. Last season, Musgrove pitched the first and (so far) only no-hitter in Padres history.

With All-Star closer Clay Holmes not quite the infallible weapon he was before the All-Star break, the New York Yankees added bullpen depth by acquiring right-handed reliever Scott Effross from the Chicago Cubs for 24-year-old pitching prospect Hayden Wesneski.

Effross, 28, has a 2.66 ERA in 47 appearances (with one save) for the Cubs, and was seen as a possible closer candidate if they traded David Robertson.

Instead, the side-arming Effross is traded first as the deadline enters its home stretch.

Nationals make a trade! Just not that one.

It wasn’t a Juan Soto blockbuster that has the MLB world on edge, but the Washington Nationals did open Monday’s trading with a minor deal.

Adrianza was a nice contributor to the Braves’ 2021 title run when he hit .247 with a .728 OPS. However, he struggled with the Nationals this year, hitting just .179 with no home runs.

Outfielder Trey Mancini, Orioles: The Orioles shouldn’t trade him. He means too much to the organization and this is a team that has stunned everyone by hovering around .500. Yet, baseball is a cold-hearted business.

Starting pitcher Noah Syndergaard, Angels: He no longer blows away hitters with his fastball. He’s not considered an ace or even a No. 2 pitcher. But, oh, has he learned to pitch with his off-speed stuff. He’d be a nice No. 3 starter for any contender.

Starting pitcher Jose Urquidy, Astros: The Astros are so deep that they don’t really need him. He has a career 3.66 ERA, is eligible for arbitration for the first time this winter, and has postseason experience, too. He is being offered in package deals for a slugger.

Jacob deGrom is set to return to the mound for the Mets on Tuesday against the Nationals after more than a year away from the major league mound.

“It’s been a long time. This has been a pretty slow process of coming back,” deGrom said. “I’m excited to be out there. The nerves haven’t really set in yet. I’m sure Tuesday I’ll be pretty nervous. I have a feeling it’s going to feel like my debut.”

The two-time Cy Young winner has not pitched in a regular-season game since July 7, 2021, after forearm tightness evolved into a ulnar collateral ligament sprain that kept him out for the remainder of the 2021 season.

“You want to be out there playing,” deGrom said. “Every day you’re able to put this uniform, I’m thankful for. It’s been a while since I’ve been able to get out there and compete. I’m ready. It’s exciting. I’m ready to help these guys.”

Cincinnati Reds slugger Brandon Drury carries a lot of value as a right-handed power bat who can play anywhere in the infield and in the corner outfield spots.

He’s one of nine MLB players with at least 20 homers and 20 doubles, joining a list of sluggers that includes Paul Goldschmidt, Austin Riley, José Ramírez and Vladimir Guerrero.

“It’s definitely a little bit different because it could be a whole new clubhouse in a matter of a day,” said Drury, who has been traded three times in his career. “It’s definitely on my mind a little bit, but at the end of the day, whether I’m here or somewhere else, I get to keep playing baseball. That’s all I can control.”

One current closer who definitely will not be traded at the deadline is Daniel Bard of the Colorado Rockies. Bard, who has a 3-3 record with 21 saves and a 1.91 ERA in 37 games this season, signed a two-year extension on Saturday that will keep him in Colorado through the 2024 season.

Among the closers who could possibly be dealt before Tuesday’s deadline are: the Orioles’ Jorge Lopez, the Tigers’ Gregory Soto, the Marlins’ Tanner Scott, the Pirates’ David Bednar and the Cubs’ David Robertson.

Tue Aug 2 , 2022
Profitable profits outreach is greatly dependent on picking to speak to the correct man or woman at the proper time with a information that is personalised to their agony points or goals. In 2021, Profits Hacker claimed that 80% of B2B corporations are presently employing buyer intent details and 16% […] 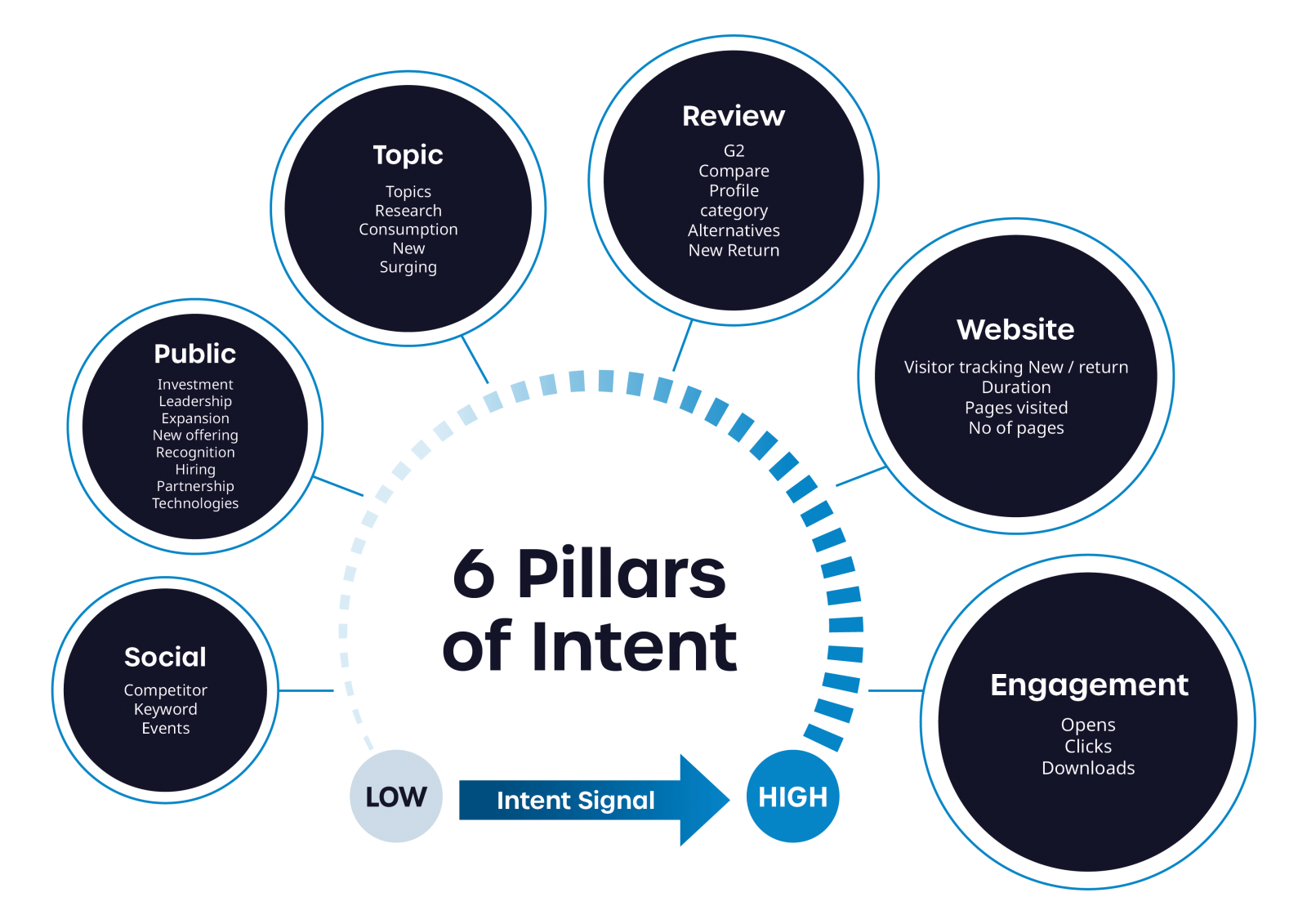