Dow Jones futures fell slightly Sunday evening, along with S&P 500 futures and Nasdaq futures. The stock market rally had a generally positive week, with the Nasdaq and small caps leading the way.


But with the major indexes at resistance levels following strong recent gains, the market rally showed resilience amid some mixed headlines.

Chip stocks are rebounding, a positive sign for any market rally. Monolithic Power Systems (MPWR), KLA (KLAC), Analog Devices (ADI), Axcelis Technologies (ACLS) and Onsemi (ON) are running up, but are currently in no man’s land, extended from early entries but below traditional buy points.

Apple (AAPL) is perhaps still in range of an early entry, but investors might want to wait to see if AAPL stock can forge a handle.

Tesla stock sold off on Friday, but the EV giant needs to take a break. Meanwhile, the California DMV has accused Tesla (TSLA) of false advertising in promoting Autopilot and Full Self-Driving.

Finally, Celsius (CELH) got a heat check after huge gains in recent days and weeks. What should investors do with CELH stock with earnings on tap Tuesday?

The video embedded in this article discussed the market action and analyzed Vertex Pharmaceuticals (VRTX), EQT (EQT) and ACLS stock.

Berkshire Hathaway (BRKB) operating earnings rose 39% vs. a year earlier to $9.28 billion. But Warren Buffett’s conglomerate suffered a net loss of $43.8 billion. That reflects a $53 billion loss in investments, amid the plunging stock market that bottomed in June.

Berkshire bought back just $1 billion in its own stock in Q2, down from $3.2 billion in Q1. Instead, Berkshire has been loading up on Occidental Petroleum (OXY).

The Senate approved the tax-spending-climate legislation with Vice President Kamala Harris breaking the 50-50 tie. The House will likely take up the package, which includes green energy incentives, expanded ObamaCare subsidies, some drug price controls and tax hikes, in a few days.

The 10-year Treasury yield leapt 20 basis points to 2.84%, including 16 basis points on Friday following the hot jobs report. The odds of a 75-basis-point Fed rate hike on Sept. 21 rose to two-thirds from about 40% ahead of the employment data.

Fed Governor Michelle Bowman said Saturday that she supports similar rate hikes to the 75-basis-point moves of the past two weeks until “we see inflation declining in a consistent, meaningful, and lasting way.”

U.S. crude oil futures plunged 9.7% for the week to $89.01 a barrel, hitting their lowest levels since before Russia’s Ukraine invasion in late February.

Monolithic Power stock surged nearly 15% to 532.33 last week on strong earnings. Perhaps investors could have bought MPWR stock on the Aug. 2 earnings gap, as it cleared some other resistance areas. But as of Friday’s close, Monolithic stock was 17% above its 200-day line and 24% above its 50-day line. The relative strength line is already at a high, signaling MPWR stock’s outperformance vs. the S&P 500 index. The stock does have a 580.10 buy point from the consolidation going back to late November. But ideally, shares would pause and form a handle. That would offer a lower entry as well as let the moving averages catch up some ground.

It’s the same story for Axcelis, Onsemi and KLAC stock, all of which reported earnings in the past two weeks, and are now extended from moving averages but below traditional breakouts. ADI stock is much the same, though Analog Devices earnings are on tap Aug. 17.

Apple stock rose 1.75% to 165.35, its fifth straight weekly gain. Investors could have bought AAPL stock as it cleared the 200-day line on July 29 following earnings. At 3.7% above the 200-day line, it’s still arguably actionable as an early entry. Apple is the only megacap trading above its 200-day line.

The RS line for Apple stock is at highs already. The official buy point is 183.04, but a handle, at current levels or a little higher, would be appealing.

Tesla stock sank 6.6% to 864.51 on Friday, down 3% for the week as it erased much of a seven-day winning streak. That also pushed shares back below the 200-day line. But if TSLA stock can pause for a few days around current levels, then getting above Thursday’s high of 940.82 could offer an aggressive entry. It would be too low for a traditional handle.

Legal experts say Twitter (TWTR) has a strong case that Musk should have to go ahead with his $54.20-a-share takeover deal. The Musk-Twitter trial will take place in October. Amid the latest legal filings, TWTR stock rose 3.6% to 42.52 on Friday, reclaiming the 200-day line and hitting its best levels in nearly three months.

Meanwhile, the California Department of Motor Vehicles on July 28 accused the EV giant of misleading customers about the capabilities of Autopilot and FSD, according to filings first reported on by the Los Angeles Times. But if the state DMV wins its action, it’ll likely only require Tesla to modify its advertising and marketing.

Celsius stock has been on a huge tear since it blasted above its 200-day line on July 5. News broke on Aug. 1 that PepsiCo (PEP) was taking a big CELH stake and would be the lead distributor for the energy drink maker.

On Friday, CELH stock tumbled 9% to 98.62, though it bounced off its 10-day line and still leapt nearly 11% for the week. Celsius will move up from the small-cap S&P 600 to the S&P MidCap 400. But fewer mutual funds and ETFs track the midcap fund vs the S&P 600, so the upshot is that fewer index funds may own CELH stock. Also, energy drink leader Monster Beverage (MNST) gapped down 5% Friday on weak earnings.

Celsius earnings are due Tuesday, so investors have decisions to make. If you bought CELH stock near the 200-day or resistance around 72, then you still have plenty of cushion. You could choose to lock in some partial profits. For those who bought extended, say on Monday’s Pepsi news, you could have little cushion or be sitting on a loss heading into results. Celsius stock tends to move a lot on earnings.

It was a mixed week for the stock market rally. Growth stocks and small caps led the way while the Dow Jones and S&P 500 were little changed

But given the deluge of earnings and a red-hot jobs report signaling big Fed rate hikes for longer, the market rally could have sold off hard late last week after stocks ran up to resistance levels. But they paused, at most. Friday’s action in particular was encouraging.

A longer pause or modest pullback would be healthy. The market rally has run up a long way, with most of the advance coming on relatively light volume.

Meanwhile, a lot of leading stocks or potential leaders could use a breather. The major indexes pausing or pulling back would offer an opportunity for the likes of Monolithic Power and Onsemi to forge handles, creating lower entries and letting moving averages catch up.

The same goes for Apple stock, Tesla and many others.

Market leadership is broadening out. Biotechs, chips, aerospace/defense, solar, steel and energy, just to name a few, are showing strength.

These are encouraging signs. But this could still be a bear market rally that eventually runs out of steam.

Investors should be playing this market, but not for all the marbles. There are still reasons to be cautious about the current market. At any given time, not many stocks are flashing buy signals, while shakeouts and sector rotations can make holding onto positions difficult.

So add exposure carefully. There’s still an argument for taking some partial profits.

Build up your watchlists. Make sure to cast a wide net so you spot potential leaders from a variety of sectors.

Catch The Next Big Winning Stock With MarketSmith

Mon Aug 8 , 2022
It was far more of the same Sunday for the 2nd yearly IndyCar Large Machine Audio City Grand Prix, which was filled again with wrecks, mishaps and caution flags. Chaos dominated the day even right after organizers tried to strengthen the distinctive 2.17-mile monitor hoping for a cleaner race. Following virtually a […] 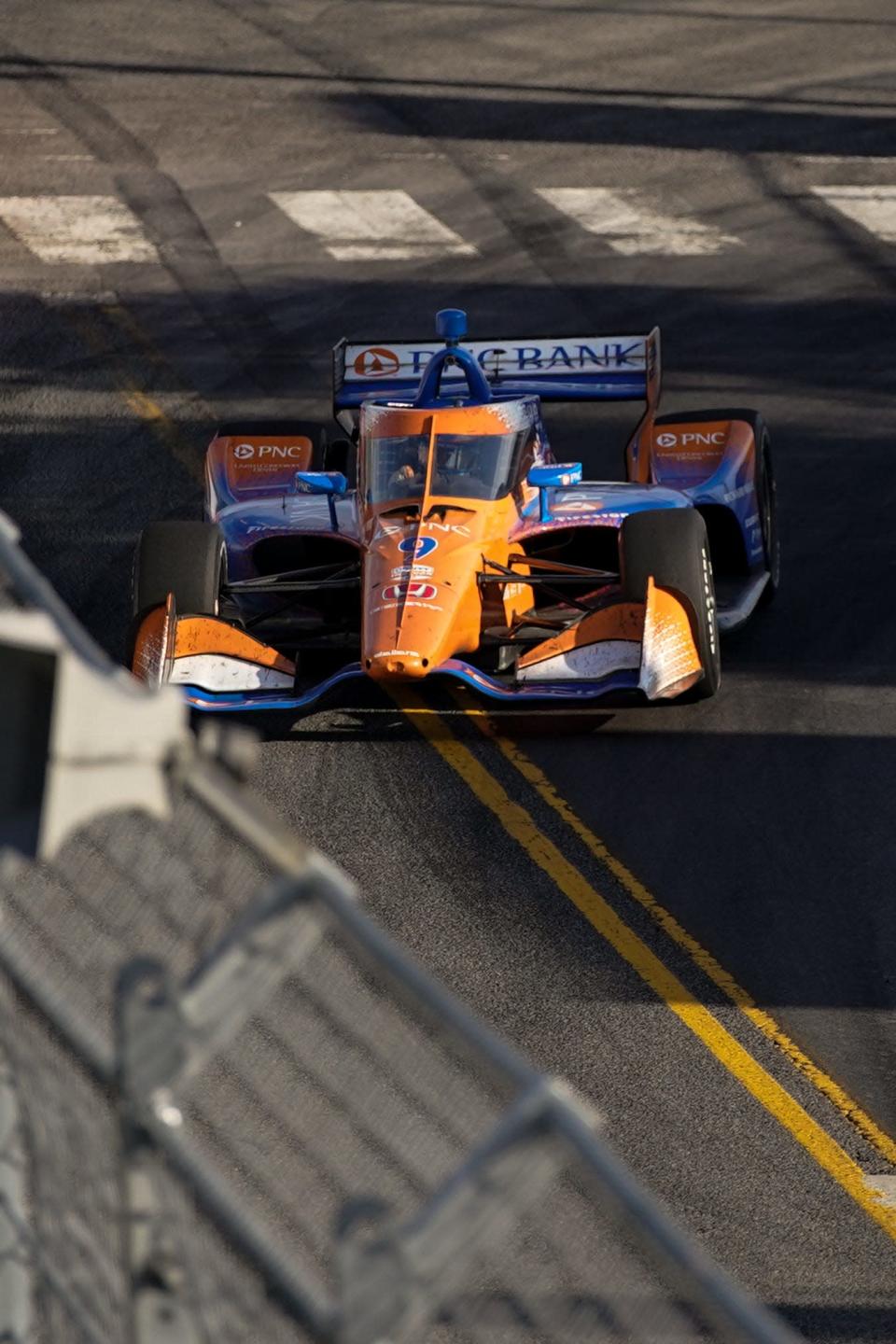