Arista Networks (ANET), Nvidia (NVDA) and Tesla stock were notable losers on Wednesday, but with different implications for their respective charts.

Finally, Extra Space Storage (EXR) broke out from a proper base, as property REITs are quietly doing well.

ANET stock, Nvidia and Tesla (TSLA) are on IBD Leaderboard. Fortinet stock is on IBD Long-Term Leaders. Nvidia, Tesla, Arista Networks and EXR stock are on the IBD 50.

At 2 p.m. ET, the central bank released Fed minutes from the March policy meeting. Participants agreed on reducing the balance sheet, starting as early as May. There was a general agreement to cut the Fed’s asset stockpile by $95 billion per month as bonds mature. That includes $60 billion in Treasuries and $35 billion in mortgage-backed securities. The Fed could phase in those caps over three months.

“Many” Fed officials signaled support for a 50-basis point hike at one or more upcoming meetings. Several favored a half-point move in March, but went along with a quarter-point Fed rate hike due to Russia’s Ukraine invasion, according to the minutes.

The stock market rally retreated again on Wednesday, with volatile moves after the Fed meeting minutes were released.

Apple stock fell 1.85% to 171.83, but rebounded from its 21-day exponential moving average. Wednesday’s intraday drop offered a bit more of a shakeout in the tech titan’s handle in the double-bottom base. The proper buy point is 179.71. It’s possible Apple stock will form a three-weeks-tight after Friday’s close, though that wouldn’t offer a different entry.

The relative strength line for AAPL stock is right at highs.

FTNT stock sank 2.9% to 332.07 on Wednesday, but found support its 21-day line. The cybersecurity leader now has a handle on a wide-and loose base, giving it a 353.08 buy point. But with a P-E ratio of 86, Fortinet stock may struggle as Treasury yields race higher.

Extra Space Storage stock climbed 3.4% to 212.37, clearing a 211.15 cup-with-handle buy point. Volume was below average but picked up near the close.

Self-storage peer Life Storage (LSI) is moving up the right side of a cup base, but doesn’t have a handle in play. LSI stock does have an RS line at a new high.

The major indexes and leading stocks will often rise on an escalator and come down on an elevator. ANET stock is a good example of that. Shares raced up after March 14. Arista stock reclaimed its 50-day line on March 17 and then decisively cleared a trendline the following day, offering an early entry. Shares continued to rise up the right side of a cup base, hitting 143.57 intraday before reversing for a slim decline.

But on Wednesday, ANET stock tumbled 6.4% to 132.01, wiping out most of the gain from the trendline entry.

Could Arista stock find support here? Sure, but shares could also tumble below their 50-day line and beyond.

Nvidia stock tumbled 5.9% to 244.07, knifing below its 50-day and 200-day lines intraday, though it closed just above the latter. The chip giant fully round-tripped a move above the 50-day line starting March 17. That March 17 move and a big gain on March 24 offered early entries. But NVDA stock soon lost momentum, as the chip sector came under heavy selling. On Tuesday, Nvidia stock skidded 5.2% to close just below its 21-day line.

Tesla stock sank 4.2% to 1,045.76. After surging since March 14 with only a couple of momentary pauses, TSLA stock finally could be working on a noticeable handle for its deep cup base. Arguably, Tesla ideally would drop to the 1,000 level or just below, undercutting the 21-day line to truly shake out some weak holders.

The official buy point is 1,208.10, according to MarketSmith analysis. But a handle would offer a lower entry. Tesla stock this week topped out right around a trendline entry, giving further weight to that area as a key level.

Of course, just because a stock might be forming a handle doesn’t mean the handle will form, and that the stock will break out successfully. If the market rally and highly valued growth stocks continue to falter, Tesla could retrace much or all of its recent gains, like Arista Networks and Nvidia stock.

Tesla Shanghai has been closed since March 28 as China’s financial hub is under a strict lockdown amid soaring Covid cases. The factory will likely remain closed through at least Thursday and it’s unclear when it might reopen. Some Tesla suppliers also are likely affected.

Tesla Vs. BYD: Which Booming EV Giant Is The Better Buy?

Even as the market rally was surging higher in late March, busting through some resistance levels, it was unclear if that was the start of a long-lasting uptrend or just a “bear market rally.” That’s still unclear, but the stock market rally is showing some serious strain, with Fed balance sheet cuts and rate hikes front and center.

The Dow Jones, S&P 500 and Nasdaq all fell through their 21-day moving averages. The S&P 500 also undercut its 200-day line. The Dow Jones and Nasdaq found support around their 50-day lines.

The S&P MidCap 400 and small-cap Russell 2000 fell through their 50-day lines Wednesday after tumbling below their 21-day averages on Tuesday.

Perhaps this is just a market rally test, and the major indexes will rebound quickly or after some sideways action. But the selling could continue, especially in growth stocks.

Meanwhile, there are not a lot of stocks setting up right now. Some leaders are pulling back to major averages, but many are breaking sharply lower.

On the upside, fertilizer stocks are still running, but are greatly extended. Some energy and defense stocks such as Exxon Mobil (XOM) and Lockheed Martin (LMT) are consolidating bullishly after recent gains, but could use some more time to finish carving proper bases.

Medical stocks have been performing well, though few are near buy points right now. Eli Lilly (LLY) and UnitedHealth (UNH) are now clearly out of buy zones, while Edwards Lifesciences (EW) and a few others are working on the right side of bases.

Some property REITs are near handle buy points, such as EXR stock. But rising rates are a headwind for yield-focused REITs, while investors might ditch these defensive names if the market rally regains momentum.

Investors should be taking a more defensive approach. The market rally is looking weaker, with some leading stocks coming under strain. Investors should be cutting losses and taking at least potential profits in faltering leaders.

If you have some fertilizer, medical or other stocks that are working, you can choose to hold or lock in some partial gains.

But there isn’t really a good reason to be adding exposure right now, given the overall market weakness and lack of setups.

That could all change in a hurry, so you want to be ready. A new crop of setups could appear in a few days, so keep working on your watchlists and stay engaged with the market.

Why This IBD Tool Simplifies The Search For Top Stocks

Is It Worth Investing in Tesla Before the Stock Splits?

Thu Apr 7 , 2022
jetcityimage / Getty Photographs Tesla declared in a tweet previous week that it will inquire shareholders to vote at this year’s yearly meeting to authorize further shares in get to empower a inventory break up. Though a break up would permit more traders to manage to devote in Tesla and […] 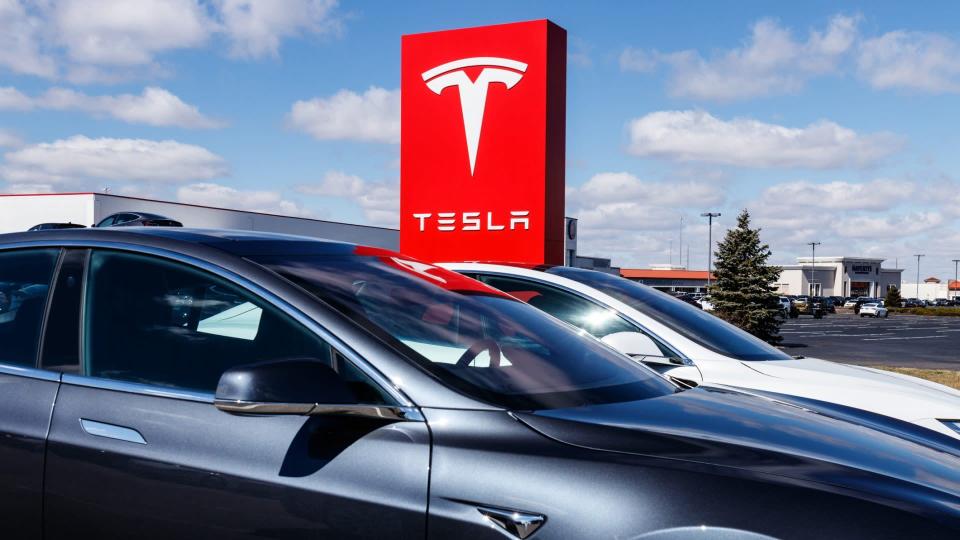