Brokerages forecast that The Aaron’s Company, Inc. (NYSE:AAN – Get Rating) will report $629.18 million in sales for the current fiscal quarter, according to Zacks Investment Research. Four analysts have issued estimates for Aaron’s’ earnings, with the highest sales estimate coming in at $643.60 million and the lowest estimate coming in at $611.14 million. Aaron’s reported sales of $467.50 million in the same quarter last year, which would suggest a positive year over year growth rate of 34.6%. The company is scheduled to report its next earnings results on Monday, January 1st.

According to Zacks, analysts expect that Aaron’s will report full-year sales of $2.36 billion for the current year, with estimates ranging from $2.35 billion to $2.37 billion. For the next year, analysts expect that the company will post sales of $2.55 billion, with estimates ranging from $2.48 billion to $2.60 billion. Zacks Investment Research’s sales calculations are an average based on a survey of sell-side research analysts that follow Aaron’s.

Aaron’s (NYSE:AAN – Get Rating) last announced its earnings results on Monday, April 25th. The company reported $0.87 EPS for the quarter, topping the consensus estimate of $0.68 by $0.19. The firm had revenue of $456.10 million for the quarter, compared to the consensus estimate of $463.47 million. Aaron’s had a return on equity of 15.25% and a net margin of 5.23%. The business’s quarterly revenue was down 5.2% compared to the same quarter last year. During the same period in the previous year, the business earned $1.24 EPS.

Separately, StockNews.com started coverage on Aaron’s in a research note on Thursday, March 31st. They issued a “buy” rating on the stock.

The firm also recently disclosed a quarterly dividend, which will be paid on Tuesday, July 5th. Stockholders of record on Thursday, June 16th will be paid a $0.112 dividend. This represents a $0.45 dividend on an annualized basis and a dividend yield of 2.43%. The ex-dividend date is Wednesday, June 15th. Aaron’s’s dividend payout ratio is 15.73%.

Headquartered in Atlanta, The Aaron’s Company, Inc (NYSE: AAN) is a leading, technology-enabled, omnichannel provider of lease-purchase solutions. Aaron’s engages in direct-to-consumer sales and lease ownership of furniture, appliances, consumer electronics and accessories through its approximately 1,300 company-operated and franchised stores in 47 states and Canada, as well as its e-commerce platform, Aarons.com. 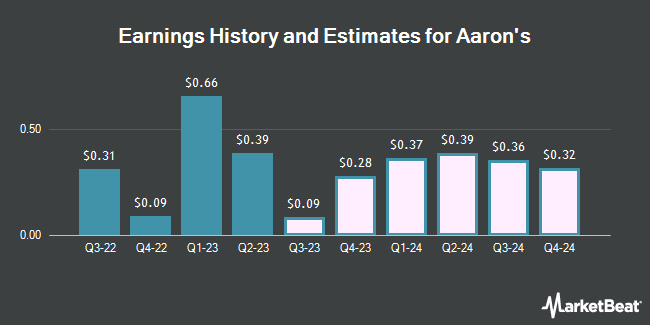 Receive News & Ratings for Aaron’s Daily – Enter your email address below to receive a concise daily summary of the latest news and analysts’ ratings for Aaron’s and related companies with MarketBeat.com’s FREE daily email newsletter.

Sun Jun 5 , 2022
Action Program: 1) Research, 2) Justification, 3) build Selections, 4) do an Action Prepare, 5) Implement Program, 6) Evaluate, Modify (repeat), Regular monthly (3M), 7) continually Boost. While it is not so significantly, small business success from time to time can be miles away from business people. Why is this […]