Wall Street analysts predict that The Cooper Companies, Inc. (NYSE:COO – Get Rating) will report $824.78 million in sales for the current fiscal quarter, according to Zacks Investment Research. Seven analysts have made estimates for Cooper Companies’ earnings, with estimates ranging from $811.10 million to $854.66 million. Cooper Companies posted sales of $719.50 million in the same quarter last year, which would indicate a positive year-over-year growth rate of 14.6%. The company is expected to announce its next earnings report on Monday, January 1st.

On average, analysts expect that Cooper Companies will report full-year sales of $3.32 billion for the current year, with estimates ranging from $3.29 billion to $3.42 billion. For the next financial year, analysts forecast that the company will post sales of $3.57 billion, with estimates ranging from $3.52 billion to $3.71 billion. Zacks Investment Research’s sales calculations are a mean average based on a survey of research firms that that provide coverage for Cooper Companies.

Cooper Companies (NYSE:COO – Get Rating) last issued its quarterly earnings data on Thursday, March 3rd. The medical device company reported $3.24 EPS for the quarter, beating the Zacks’ consensus estimate of $3.10 by $0.14. The business had revenue of $787.20 million for the quarter, compared to analyst estimates of $739.30 million. Cooper Companies had a return on equity of 9.89% and a net margin of 31.00%. The firm’s revenue for the quarter was up 15.7% on a year-over-year basis. During the same quarter in the prior year, the firm posted $3.17 EPS.

About Cooper Companies (Get Rating)

The Cooper Companies, Inc, together with its subsidiaries, develops, manufactures, and markets contact lens wearers. The company operates in two segments, CooperVision and CooperSurgical. The CooperVision segment offers spherical lense, including lenses that correct near and farsightedness; and toric and multifocal lenses comprising lenses correcting vision challenges, such as astigmatism, presbyopia, myopia, ocular dryness and eye fatigues in the Americas, Europe, Middle East, Africa, and Asia Pacific. 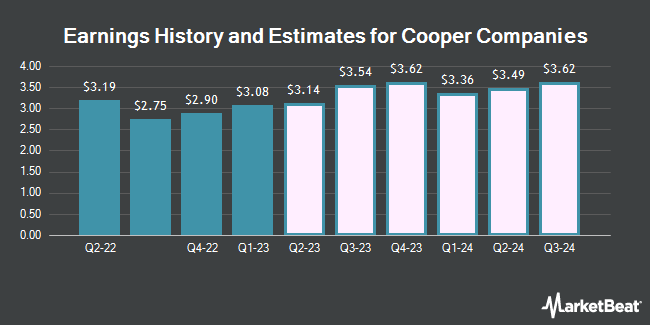