In the sports betting world, sometimes focusing on the average yields extraordinary profits for gamblers. Imagine that!

Now, this is the time of year when everybody’s dropping it like it’s hot — “it” being preseason polls. The AP just released its Top 25 preseason college rankings, and FOX Sports’ very own RJ Young got a head start in the poll games, releasing his version last week.

Even if it’s nominal, where a team lands on the AP Top 25 preseason poll does impact where it lands in the College Football Playoff (CFP) rankings, which ultimately dictates who plays for the title game. CFP announces its first rankings in October, and how high a squad climbs or how far it falls can often be tied all the way back to August’s preseason polls.

All is fair in polls and football, right?

But what role do the preseason odds play in all of this? According to FOX Sports Research, since 2008, the average preseason odds for the eventual national champion are +1415! That might be surprising because it’s often the teams whose odds are on the shorter side that bettors feel confident throwing some cash at — the Alabamas, the Georgias and the Ohio States of the world.

With this in mind, we are highlighting a few teams that we think might be worth a wager. But first, let’s turn our attention to the top 25 odds for teams to win the College Football Playoff, with all odds via FOX Bet.

The odds always tell a story, and the ones above say that the next national champion will be a team that has been there and done that recently.

But let’s dive a little deeper into the averages and look at some teams whose odds are a little closer to lucky +1415.

The Tigers have the fourth-best odds to be crowned college football’s next national champion. And it makes sense. Under coach Dabo Swinney, Clemson has been to the big dance four times and brought home the trophy twice. From developing top talents like Trevor Lawrence to appearing in seven ACC championship games, Swinney has proven that he is a force.

While bettors who’ve taken Clemson straight up (SU) in championship matchups since Swinney has been in charge are an average 2-2, Clemson could make it back this season and get backers on the winning side of this bet.

The magic number is +1415, right? Well, the Trojans’ odds are a little bit longer than the lucky benchmark, but since bigger numbers help even out averages, +2200 is worth a look.

The Trojans have a new coach in Lincoln Riley and a new quarterback in Caleb Williams, so those two developments alone make it hard not to like SC’s chances. Riley hopes to bring a Renaissance of Troy to Southern California, and if he’s successful in Year 1, bettors could cash in on a nice little pay out.

At +700, the Wolverines have the second-best odds to win the Big 10 behind Ohio State (-227). And FOX Sports Research notes that since 2008, the average preseason odds to win the conference of the eventual Power 5 winners is +702. So UM might be in the perfect spot in that category. When it comes to the odds to win the natty, however, Big Blue is pretty much a long shot at +5000.

As we said above, it takes bigger numbers to even out averages, and if coach Jim Harbaugh can ride the momentum of being the reigning Big 10 champs, then Big Blue being the last team on top in January could be possible.

As we know, these odds might move even more as we inch closer to the season. But if you’re ready to get in on the action now, head over to FOX Bet to place your wagers on the next college football national champion!

Download the FOX Super 6 app for your chance to win thousands of dollars on the biggest sporting events each and every week! Just make your picks and you could win the grand prize. Download and play today!

Get more from College Football Follow your favorites to get information about games, news and more.

Tue Aug 16 , 2022
In an ideal world, quarterback is the position that should have the least movement in Fantasy Football rankings during the preseason. Position battles matter at every position, obviously, but generally speaking, the stakes are pretty low at QB – does it really matter if Kenny Pickett or Mitchell Trubisky is […] 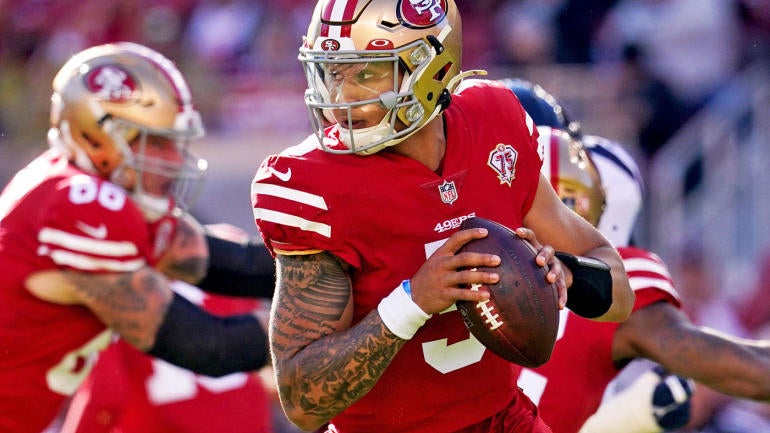